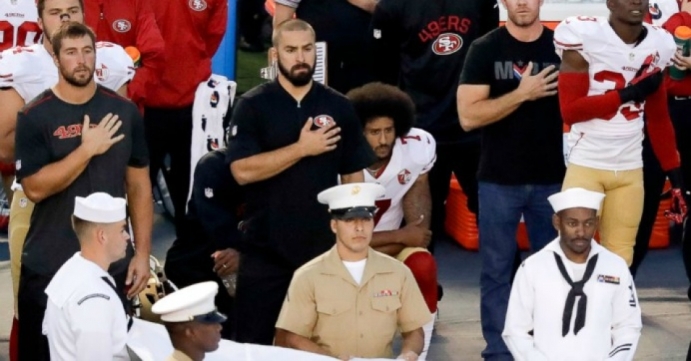 Colin Kaepernick takes a knee during the National Anthem. In the foreground, heartbroken members of the U.S. military stand there, not giving a shit.

I also know that last year he created a storm of controversy when he decided that he would take a knee during the national anthem while he was on the sidelines during 49ers games. His protest of the anthem is inspired by what he perceives as the unjust treatment of blacks at the hands of police, and the subsequent lack of consequences for those officers who cross the line and abuse their power.

Not satisfied with just the standard knee-jerk, faux patriotism of the “love it or leave it” variety, many people have weighed in on social media with the following philosophical nuggets. I would have put them in some sort of Top 5 order, but they’re all equally dumb.

The Idea: This sentiment is an answer to the argument that Colin Kaepernick, like every American citizen, has the right to freedom of speech and should not be punished for exercising that right.

Why it’s dumb: Working ANYWHERE is a privilege. (Especially in this economy!) The NFL is not some sacred oasis of occupational bliss, where all the employees walk around on some sort of sweet air, smiling away as they toil. Yes, Colin Kaepernick makes a lot of money. Yes, the NFL is a pretty cool place to land a gig. Yes, playing in the NFL is pretty rarefied air. But so what? This means that players have to put their social opinions in their locker before they trot out onto the field to entertain us slobs? That’s not fair. Besides, there’s no room in their locker; it’s filled with weed and guns.

The Idea: Rational people think that companies shouldn’t be allowed to fire somebody because they don’t like their opinions on some particular subject. In the public sector, such as education, there is a thing called tenure, that gives teachers a fair shot at defending themselves if something they say either in the classroom or on social media gets them into hot water. It doesn’t always work, but there you have it. In the private sector, however, no such protections exist, and the NFL is no exception. For the most part they can give you the boot without due process. People who tout this little nugget on social media use it to support his firing and criticize the 49ers organization for not drumming him out of the building as part of the halftime show.

Why it’s dumb: While technically true, it’s dumb because it doesn’t end with the NFL. Living in an America where a boss can give you the axe because of your opinions is the democratic-capitalist version of totalitarian regimes (we purportedly hate) who “disappear” people in the middle of the night for the same reason. I’m not suggesting that we are heading in that direction, but just so you’re informed, there are very little (if any) free speech protections on the books aimed at private companies. The Founding Fathers, when they drafted the First Amendment, were primarily concerned with government’s abuse of power, not corporations. Most of the colonists were business owners and tradesmen themselves, not employees of a company. Fast forward 230 years and some corporations in America (like our beloved NFL) have power, capital and revenue streams as large as some small countries in the world. Maybe it’s time we start protecting employees who want to write on their socks. No? Then that’s why this is dumb.

The idea: He can say whatever he wants, but he doesn’t have to work for the NFL.

Why it’s dumb: While this is also technically true, it’s also dumb because it basically says that we have two choices: shut up and earn a living, or speak out and starve. It’s important to keep in mind that the NFL hasn’t done anything to Kaepernick–they haven’t fined him, they haven’t fired him, they haven’t slapped him with an injunction. They don’t have to. We are doing it for them and we’re enjoying it! Saying you have freedom to do something and then placing such harsh consequences for doing so is like when our parents would tell us: “Go ahead. See what happens to you.” It’s not freedom; it’s a false choice. We absolutely ARE curbing his freedom of speech. Pointing out that he hasn’t been arrested for taking a knee is a pretty low bar to set on such an important freedom, don’t you think?

The idea: If Kaepernick thinks the cops are pigs and that America is a racist nation, that’s fine. He should just take his protest out on the street, or take part in a march. So long as he is out of his NFL uniform and not doing it an an NFL stadium.

Why it’s dumb: Name one living black activist besides Jesse Jackson and Rev. Al Sharpton. Go ahead, I’ll wait. The sad fact of the matter is that if Kaepernick doesn’t use his sideline position at NFL games as his platform to express his views, he won’t have a platform. His knee is a message to white America. White America has a sort of spotty record when it comes to listening to black people when they don’t have a ball in their hand or throwing punches in a ring. It’s also dumb because it basically says that NFL stadiums are special, accepted-speech only zones, and the NFL uniform is like the military uniform: everybody should stand in line and keep their mouths shut. In the military it works because it prepares them for warfare. In the NFL it works because? Well, because it allows us the comfort of watching a football game without those icky reminders of the improvements that need to be made in our society.

The idea: Ha-ha, nanna-nanna-poo-poo, you’re back-pedaling! This year Kaepernick is on the bubble of the NFL, looking in to see if he can land a job at some other team. In his interviews, he’s been a bit softer in his approach to the million-dollar question: will he take a knee during the anthem this coming year? Or has he learned his little lesson.

Why it’s dumb: Kaepernick’s waffling will soon be our waffling. Our take away from the fact that Kaepernick is being a bit more obtuse when he talks to the press is not supposed to be: ‘what a coward, phony and a hypocrite he is, now that his job is on the line.’ Our take away is supposed to be: ‘what a sad commentary it is on our culture that someone has to hide their social opinions from plain view in order to earn a living.’ This is sort of like laughing with our backs turned to the ocean after a swimmer gets wiped out by a massive wave. A lot of the joy I’m reading about his situation is coming from conservatives. My question to them is: how will you react when your liberal boss threatens to fire you for wearing a Make America Great Again t-shirt? You’ll take off the shirt and never wear it to work again? Fine. But maybe you should be the one not standing during the national anthem, because clearly you don’t embrace the sentiment behind it. The fact is that scores of police officers have committed abuses of their power by using either deadly force or some other means of violence and intimidation since Colin Kaepernick started taking a knee. Most of those officers have not had their livelihood taken away from them. You know who has? Colin Kaepernick. If we continue to revel in an employee being forced to get up off his knee, it will only be a matter of time before we find ourselves on both of ours.