Note: this essay inspired a poem I had posted earlier on this blog. It was submitted to the Dan’s Literary Prize for Nonfiction, an award I actually won in 2014. 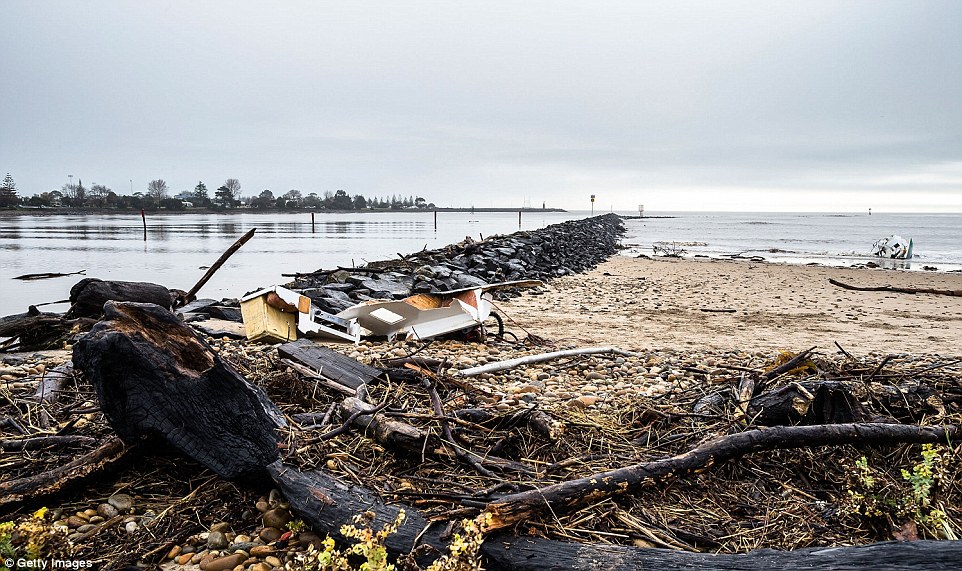 After a tropical storm hit the Hamptons in the early 1990s, a wealthy, but frantic homeowner hired my brother and me to remove the house that had drifted onto his back yard.

The customer’s waterfront home was more property than house. When we first arrived, it was an unassuming ranch with gray wooden siding. An empty flagpole in the front yard racked loudly in the persistent gusts. But when we went around back we saw an expansive green lawn, nearly the size of a football field. The customer’s private dock was twisted, angling upward toward the sky. And the house that washed ashore was everywhere.

It wasn’t intact, like something out of Wizard of Oz. Half the roof was resting on the ledge between the customer’s lawn and the bulkhead meant to levee the bay. On the lawn itself: a sofa, blankets, three picture frames, a heap of shingles, insulation (everywhere), a broken front door, an oak dresser draped in seaweed, a green painted dresser, a pink painted dresser, the twisted metal of a bed frame, a rack of pool sticks, a boy’s bicycle, children’s clothing, a waterlogged welcome mat folded on itself, three bar stools, the remnants of a brick chimney, and all of it topped with sand and seaweed. As we approached the debris we stepped on piano keys.

We’d work toward one another. I’d take the east end of the property and he’d take the west. We’d meet in the middle. With our steel rakes and pitchforks and wheelbarrows, we’d eat the elephant one bite at a time.

The distance between us was fine by me. I was angry at my brother and we had just had a blowout the night before. It was on account of his impending nuptials to a girl he’d met the year before. He was only 21 and I was just barely out of high school. He was abandoning me to my endlessly bickering and troubled parents. They were feeling the sense of impending loss as well. Somehow, between taking care of our lawn and fixing broken vehicles, my brother had evolved into the glue of our household. Lately I got the feeling my mother was yelling to keep from weeping.

The sodden grass beneath our feet reminded us of our Irish ancestry. The McGevnas were once farmers in a small town called Mullagh in County Cavan, in the north. We grew up learning about the bog cutters, whose job it was to cut squares of peat and dry them into bricks for people to burn.

The bog of this man’s back yard was ideal for turf, but terrible for wheelbarrows. We pushed with all our might to get those wheels across the lawn and dispose of the debris in the dumpster near the street. My brother kept yelling “work the field, boy,” in a fake Irish brogue–a line from one of his favorite films, “The Field.” He was doing it to get a rise out of me and it was working. I kept my eyes down on the task at hand and tried to ignore him until he kept calling out my name. I looked up and he was gesturing to the oak dresser. Some clothes were spilling out of it.

“It looks like our old room,” he shouted from across the yard. That one made me laugh. Growing up we shared a room. My brother was always after me to keep the room clean. So was my mother. One day she stormed in and gave me 15 minutes to tidy up or she’d be back with weaponry. I ignored her at my own peril. When I heard her heading toward our room, I could hardly believe the deadline had passed. “Quick,” my brother said, “everything under the bed!” We worked together and stashed every item of clothing until the floor was spotless. I closed the drawers of my dresser just as she walked in to inspect.

It wasn’t the only time he would bail me out of tough situations. As I yanked on the handlebar of a sand-buried bicycle, I was reminded of the time my brother had thrown a neighborhood bully’s bike over the fence of a public sump so I’d have time to make a run for it. The American flag that I pulled from under a rafter reminded me of the time my brother helped me collect unused firecrackers from the streets the morning after July 4.

All of it went into the dumpster as the day wore on. The bay was still churning from the previous night’s storm. There was some talk of another tropical storm headed our way. We planned to load all the contents of the house into the dumpster first and then top it with pieces of the roof. It was like we were putting the house back together the best we could, and even though it was a lost labor, it was a worthwhile labor just the same. There would always be storms. And there would always be the cleanup.

By 2 p.m. we’d nearly reached the middle of the yard, but we knew we’d need to hustle or call it a day and come back. We decided to hustle. We worked in tandem, running the wheelbarrow one at a time, while one of us filled. My brother yelled ‘work the field boy!’ as I made my runs. It felt like old times. We were possessed by a sense of recovery, a sense that we were getting someone’s life back despite the interruption.

Then…the homeowner came outside. He told us we were making too much of a racket. The shouting and the whatnot. He needed to take a nap; could we cut it out and give him two hours of quiet?

Still clinging to our plan, we took a walk down the beach. The storm had created a large pool of seawater, separated from the bay, but rippling with current from the wind. We walked along the thin strand of beach beside the pool. Suddenly my brother saw a large bluefish flopping about in the shallow end. His eyes widened like a child’s and he jumped in with his shoes on. He used his boots to shove the fish out of the water and onto the sand. It was 20 pounds at least. Its heft was making it impossible to maneuver back to safe depths. The seagulls had begun to circle.

With time to spare waiting for our customer to finish his nap, my brother retrieved a knife from his truck. Then he pulled out a lighter and gathered up some dry pieces of reed and driftwood. I started a small fire right on the sand, while my brother gutted the fish. We held pieces over the fire using long sticks retrieved from the flattened reeds between homes. We ate and laughed at our luck. Nothing to serve as seasoning for the fish except for the salt that rode along the mist.

“Work the field,” my brother said, chuckling. The gobs of fish in his mouth made marbles of his words. I asked her what his bride-to-be would think of this sight.

“She would join us with a six-pack of beer,” he said. He gripped my shoulder and gave me a playful shove.

We laughed together like we were kings of the beach. We had no bread, no wine, no side of lemon rice. There was nothing we wanted. We ate. My brother tried to pull a cooked piece straight off the skeleton like in the cartoons we watched as children in our troubled house. I saw the ecstasy of disappointment in his face when he failed. A stiff breeze introduced a wisp of gray clouds coming from the west.

We don’t remember the name of the storm that eventually made landfall. It’s the days between that storm we recall. Those moments where you gather up the pieces that have scattered. And even though they are only pieces, when you put them together they still mean something.

As we gathered our things and headed back to work, I asked him if we’d get it all done by sundown.